The start is just 24 hours away. I just returned from a very orderly and well delivered riders briefing. There were only a handful of questions afterward - which is pretty amazing! This event is just incredibly well organized, well conducted. Info is posted, or at hand, or cheerfully delivered at all times. It gives the teams opportunity to really focus, to know what to expect, to have confidence that all will be conducted fairly and efficiently - and the challenges to be met will be about horse, rider, trail and time. 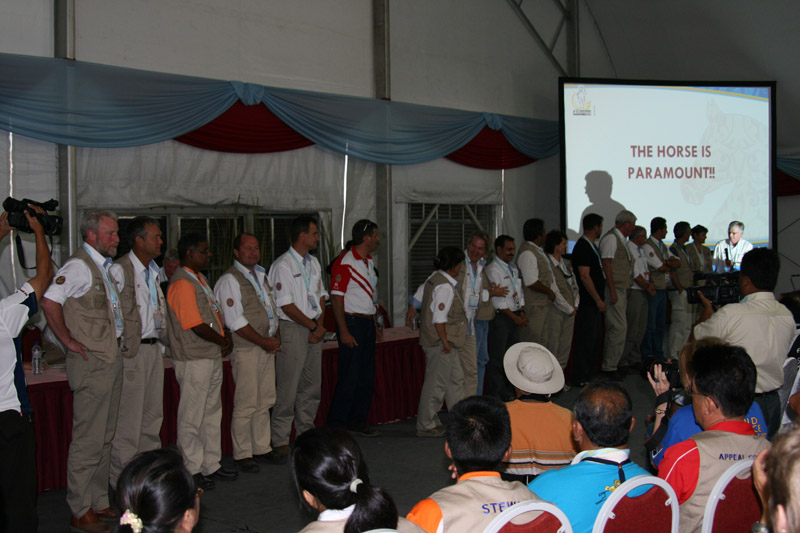 There are 7 phases (loops) - which is a lot! - and fairly long holds between each loop (40, 50, 50, 60, 50, 40) - which gives the horses time to cool out, get the body temperature back down, and there are also mandatory re-checks on the last 4 loops, so the veterinarians have ample opportunity to identify horses which could develop problems. Honestly, there is a LOT of concern here about horses and heat and speed - and the danger of the heat/speed factor. There are 17 veterinarians. There is an onsite clinic for the treatment of horses. There is also a fully equipped, modern horse surgery in Kuala Terengganu (the city) which is a 30 minute drive. If a horse needs surgery (colic, fracture) it will be shipped to the hospital. Otherwise they'll stay here at TIEP for treatment.

The ride will start at 5:30 pm - which will allow the first phase to be held entirely in the daylight. The officials are probably going to impose cutoff times on all but the first phase and I've heard that 12km per hour will determine the minimum speed - but they hadn't decided anything for sure by the end of the meeting. There will be an overall cutoff of 13:20 (which is the same time frame that was required for 'CoC' qualification. People are guessing that the winning time will be around 16 - 17 km/hr (around 10 mph). With almost 5 hours of total hold time, it could be 9 or 10 am before the winners arrive, and after noon before the last riders are in. The mid-mornings can be very hot... 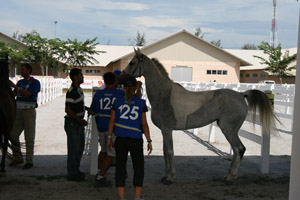 The 'First Inspection' or vetting in happend this morning. All of the countries came to the vetting area according to which quarantine barn they were in. Passport exams, metabolic and soundness evaluations - and final determination that the horses were fit to start. There were a lot of very fit and excited horses! Several were quite bothered by the whirring fans and misters, but we suspect they'll be fine after the first loop!

Lots of folks are discussing 'favorites' - teams and individuals. It's fun to hear the speculation - among top contenders are France, UAE, Belgium, USA, Uruguay... but we shall see! So much depends on the weather. It rained this afternoon - a very welcome change from the fierce dry (relatively) heat of the past few days.

We went to an incredible Opening Ceremony yesterday, held at the Sultan Mizan outdoor stadium - which was packed! They're guessing it was close to 50,000 people there. We were treated to dancing, drum concerts, marching band, Lorenzo the amazing French horseman (really amazing!!!), parade of participants, and an overwhelming fireworks display to cap the evening. The fireworks were so bright, so intense, so loud, I felt each explosion of sound reverberate in my chest, each burst of color made me whoop with enthusiasm. Spectacular. And then it took a full hour to get out of the stadium parking lot :)

I'm meeting so many new people at this event, so many new friends. Next year it's looking pretty certain that I'll travel to Russia and then to Hungary for the WEC for Juniors and Young Riders. I've been promised tours of the best Arabian and Shagya studs. And they tell me Hungary has some might fine vineyards too! And we might just have to travel to Assisi (Italy) for the European Championship - it looks to be a fairly high profile event.

And of course so many 'old' friends too. Hasumi-san arrived, and he is fit and ready to ride! We figured out that he is the oldest male rider at 65 yrs. His horse 'Fayette de Cameo' looked mighty fit and ready to go too - she was a handful at the trot-outs. I saw Emmett Ross at the rider briefing, taking in all the details, as he is the director of Endurance for the 2010 WEG in Kentucky. Folks are already talking about that event too!

and now we're off to dinner - more later,