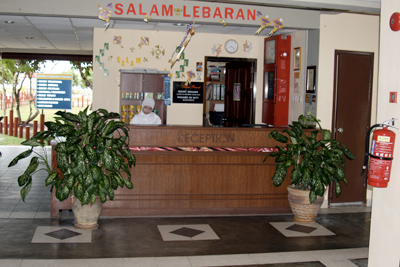 It was a very long trip from Idaho to Malaysia (last night I woke from a dream/nightmare where I was sitting in a small cramped center seat and even though the rest of the airplane's seats were empty the stewardess told me I had to stay where I was :) . But then I stepped out of the arrival gate into the Kuala Lumpur airport and just had to smile. I love this airport, and have so many fond memories of previous trips to Malaysia. The warm sweet air, the bright colors, the music which has a touch of the tropics and a touch of arabic, the friendly faces - I think the Malays are some of the most openly warm and friendly people on this planet. I left the International terminal and boarded a domestic fight from Kuala Lumpur to Terengganu, and landed at the newly built Terengganu Sultan Mahmud INTERNATIONAL Airport! The older buildings were gone, and a beautifully architectured airport was there in it's place. With the extension of the runway (2800m to 3400m) the airport was now able to receive the big International jumbo. Last year for the Sultans Cup, the international horses were flown into Kuala Lumpur, and then brought to Terengganu by the smaller Malaysian Airforce cargo jets (C-130 Hercules), which was adequate for the 15 invited horses, but not for the 150 horses that would need to be flown in for the WEC! 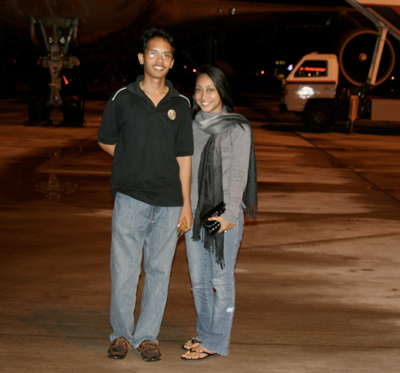 I was met at the airport by familiar friendly faces. Mimi herded me into one of the transport vans and off we went. I stopped by the venue (TIEP, Terengganu International Endurance Park) before going to my hotel to say hi to everybody. Azrin, Salim, 'Boy', Marouf, Zulu - it was great to see everybody again. They were all looking busy, non-stop motion, and looking just a wee bit tired. Among all of the other tasks at hand, preparations were being made to receive the final MAS transport of horses to Terengannu. There would be a chance to rest a little after that, but for now they were all still in high speed mode.

I checked my email - fast wireless connection - at the venue, and then the driver took me to my 'home' for the next three weeks. I would be staying at the Merang Suria (Best Western) Beach resort, along the coast just south of the Sutra where I stayed last year. With so many people to be accommodated, Azrin said they had fully booked 6 hotels in Terengganu, some of which were just finishing additions in time for arrivals. There will be just a few of us (WEC folks) here at the Suria - me and John when he arrives next week, Cue (liason), Hisham (transportation coordinator), the Russians , the Hungarians and the Slovak Republic. Plus a few others - I met on of the vets this morning Dr. Karappanan who is taking care of the quarantine horses. It's a very 'local' hotel, not as fancy as the others, but quiet and spacious. There's a TV in the dining hall which runs all day with music, local shows, some interesting stuff :) 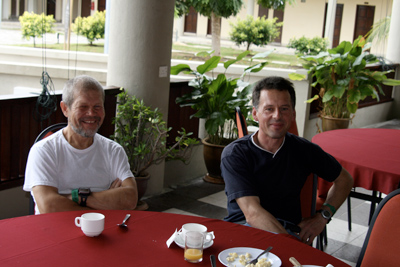 After an early dinner (I hadn't slept in 24 hours and didn't think I could stay awake until 7pm dinner time) I went to my room, a nice little ground floor room with a patio door opening to the sandy yard out back, and crashed. And since I fell at sleep at 6pm, of course I woke up at 2am. Wide awake, and hungry (again) with nothing to eat. But, there was an electric water pot and Nescafe instant coffee, creamer and 2 cups on the dresser so I figured that would sustain me. But first I decided to get out the computer and set up and try to work some. I went to plug the bus (with several US sockets) into the wall outlet and Zap! a spark, the smell of hot plastic, and the lights went out in my room. damn... So now, no electricity for the computer, and even worse no coffee! I was wide awake and getting hungrier and it would be several hours before the restaurant opened. I wandered over there just in case there was something left out from last night (maybe some crackers...) but nothing. What was I going to do for the next 4 hours!? I went back to my room along the lit outdoor walk way and noticed 2 electric outlets in the hall outside my room - hooray! maybe these were still working. I propped the door of my very dark room open with one of the big wooden chairs that were in there, and dragged the computer, the 3 prong adaptor and the electric water pot outside, and yes, the outlets were live, so I was set for the morning. 2 cups of Nescafe with creamer and sugar should keep me till breakfast, and I had the computer and a cool breeze off the ocean, plenty of work to do, and all was well. What I didn't realize at the time was that with the door propped open, half of the Terengganu mosquito population had decided to take residence in my room... I discovered that the following evening. 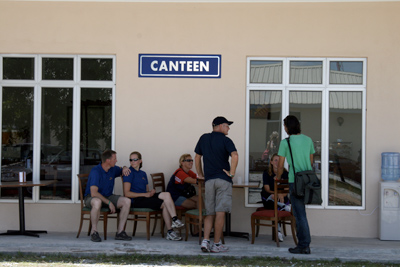 A classic start to the 2008 Malaysia WEC adventure! After a real breakfast at the outdoor dining hall I got a ride to the venue and settled in to the media room to check email, work on the website, and get reacquainted with everything. Azrin said the final shipment of horses would be that night so I would plant to go along and see if I could get some photos and info. This plane was coming directly from Europe with team horses from Spain, Portugal, Netherlands, and one Argentine horse. (huh?) I worked in the morning, bumped into a few friends (Yaguchi who was here early with Hasumi-san's horse Fayette de Cameo - the Tevis winning Shagya Arabian, Mercedes Tapia here with her polo mare Caiparinia - the mare that became crazy on the polo field, but found a new career in Endurance) and then went back to the hotel to try to catch some sleep before the 1am arrival of horses at the airport.

It was a most incredible thing to be standing outside on the tarmac, puddles from the recent rain, warm breeze, to first see the airplane lights in the distance, flying by overhead, disappearing out over the ocean, and then coming back in for a landing, the lights, the incredible noise of the jet engines, and then be standing there as the plane taxied right up to us. It raised goosebumps on my arms, and made my heart beat faster. Wow! There were 100 other people there, waiting for the horses, watching to make sure the horses were unloaded safely off the plane - one 3 horse cargo box at a time - and then loaded safely into the waiting horse vans. The Argentine horse belonged to Carolina Greenwald - there had been some problems with travel papers, and the horse, Jesse Q, had been detained in Amsterdam until the proper papers arrived. Carolina was ecstatic to see her beloved horse! She and Jesse had also competed at the 2006 WEC in Aachen, and were a very tight team. And to make her story even more poignant Carolina would head to the US, to Maryland, the following day to attend her husbands funeral. He had died over the summer, but as a member of the US military would be granted a ceremonial funeral at Arlington Cemetery along with other military men and women who had died that year. I can imagine that her emotions were strong that night, and her reunion with her horse was even more special.

I spoke a little bit with the man (his name escapes me) who oversaw the construction - and completion - of the airport runway. The tall man whose efforts and focus helped insure that the cargo planes would be able to land in time for the WEC. He quietly watched the arrival of the plane, I could tell he was proud. He and Dato' Salleh (chair of the WEC organizing committee) spoke some and watched the arrival together - and shared the feeling of accomplishment - and relief.

I'm starting to settle in now, sleeping through the night (sort of) and finding my way around again. I had lunch at the stable 'Cantina' so I could meet up with the riders and grooms that were here with the horses. I was very glad to meet up with the USA folks - we had lunch together - I talked to everybody about their horses, their travels - everything was going well, the horses were adapting. I saw so many familiar faces - the Canadians where there, friendly and open as always. The folks from South America, Europe... I couldn't put a name with every face, yet, but the faces were familiar and friendly! (a little side note - later that evening I was struck with a very intense, very immediate intestinal emergency... after talking to some of the others that had eaten lunch together they had the same reaction - it must have been something that we all ate - and I laugh every time I imagine all of us that evening - at the same time, but in different places..... )

So, on we go! Today I'm going into town with Yaguchi (who has a car) and Sasaki (here as groom for Hasumi-san) and Mercedes. They will buy apples and carrots for the horses, I will buy some food to keep in the little refrigerator in my room (for emergencies!) and a few other supplies. It's a very cool morning - it rained during the night, and the cloud cover is thick. I'm still comfortable in a tshirt, but just barely. Though I hear from John that it is VERY cold in Oreana right now, they had a freeze last night, so I'm thinking that maybe it's not too cool here :)